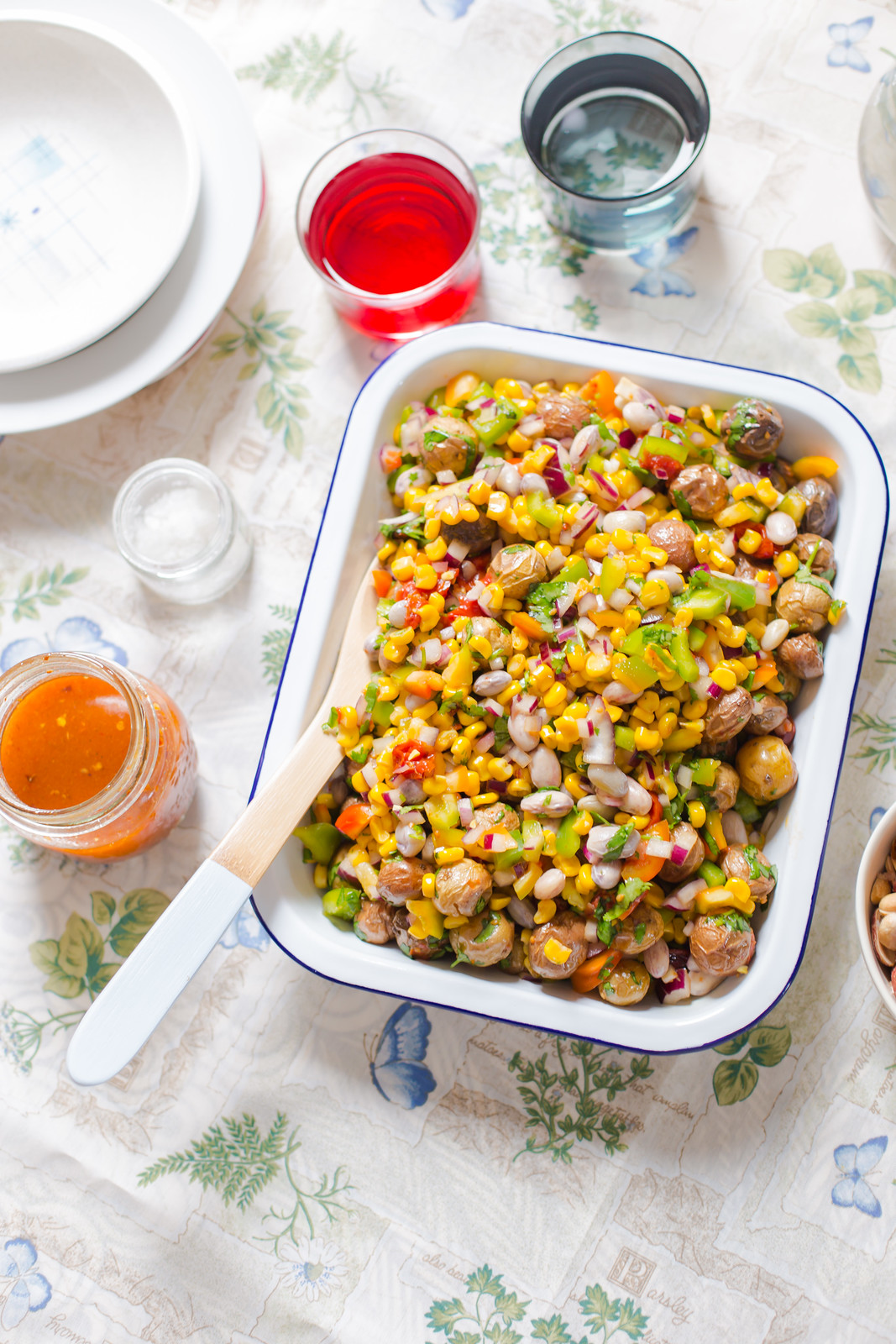 We’ve been a little obsessed with corn lately. We go to the farm market diligently on weekends and cart home ears and ears intensely sweet sweetcorn. In essence, this summer will go down as the one where we rediscovered corn! I made creamed corn for breakfast last weekend; this time with fresh corn, custard powder, coconut milk and lots of nutmeg. I sat out on my breezy little balcony and enjoyed it while watching the street come to life.

Lunch on Sundays is usually a salad, made with whatever produce we’ve managed to grab from the market. Since it’s summer and corn is at its peak, there is likely be corn in our summer salads; It never gets boring.
I was thinking of a fresh hearty and vibrant seasonal salad with this roasted potato and cranberry bean salad. I’ve always liked the idea of beans and potatoes as the herbivore’s version of meat and potatoes. 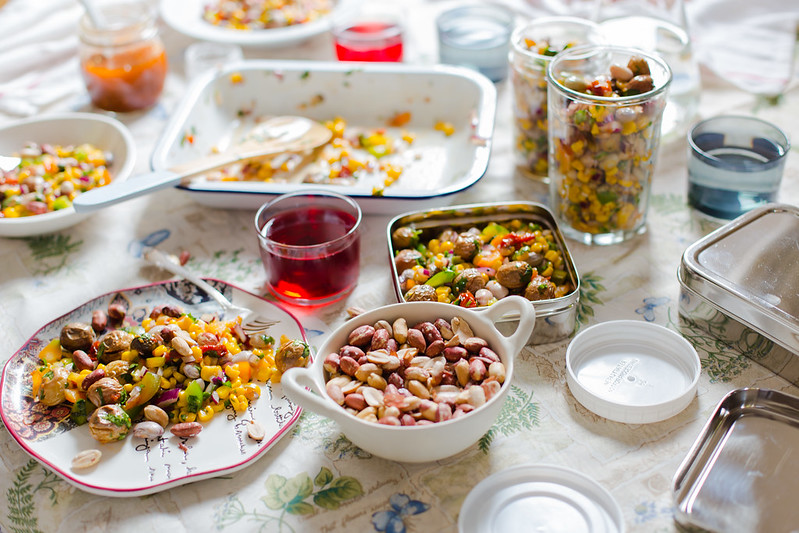 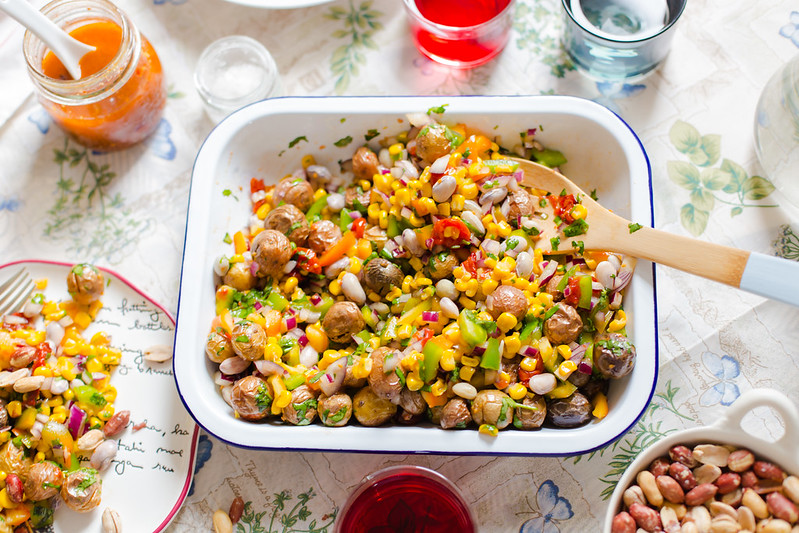 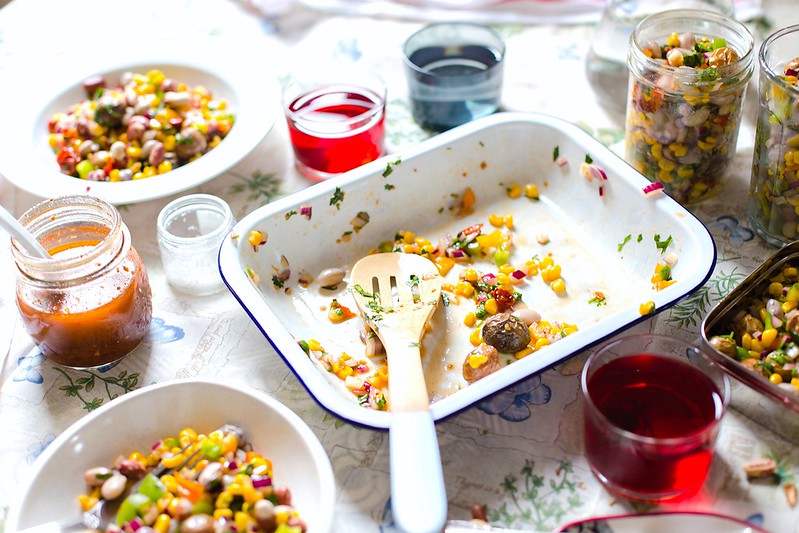 Delicate cranberry beans, sweet and creamy with its pretty pink flecks also pop up at the market around this time of year. It’s hard to resist the speckled pink pods. Similarly, new potatoes are in too; I like to pick small marble-sized nuggets for salads.

These potatoes are roasted in a bit of salt and salad dressing, they can also be cooked (in a pot of water on stove) until tender then tossed in a skillet with the dressing.
The beauty of these types of salads is that you can build it using your favourite seasonal vegetables. Potato, beans and corn are the headliners here; I toss in some tomato, onion and sweet peppers for substance and texture, but I envision many other tasty veggie variations. 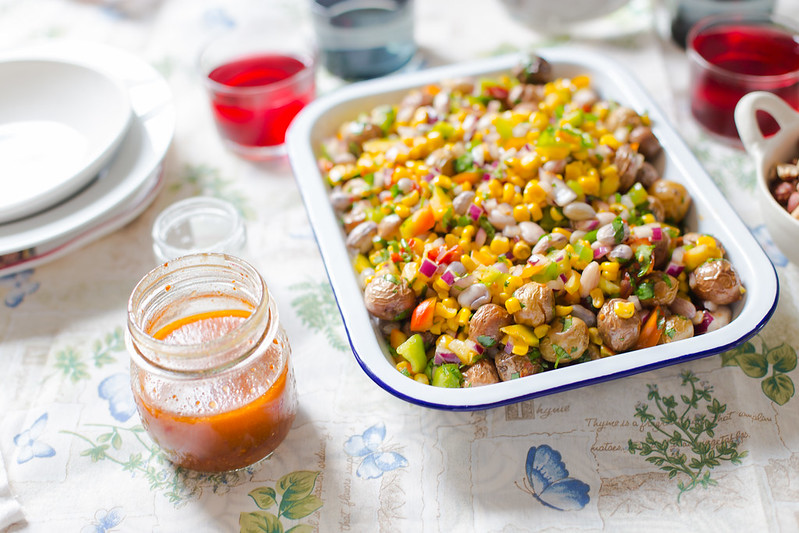 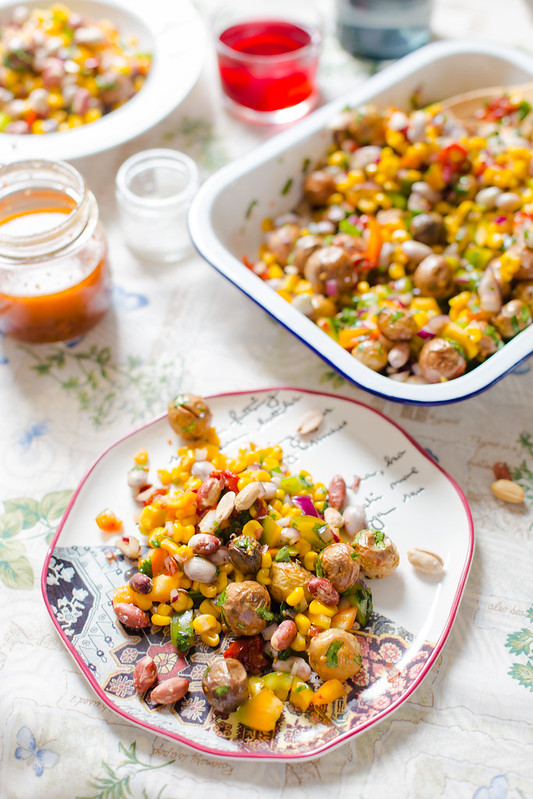 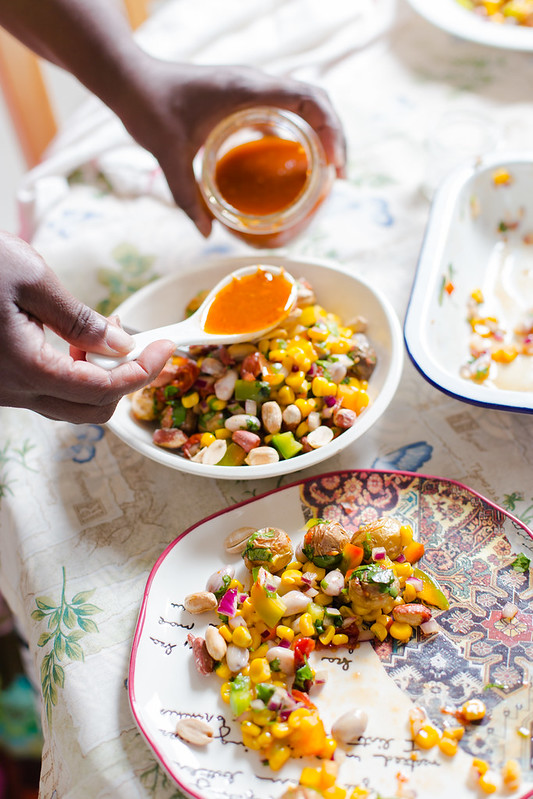 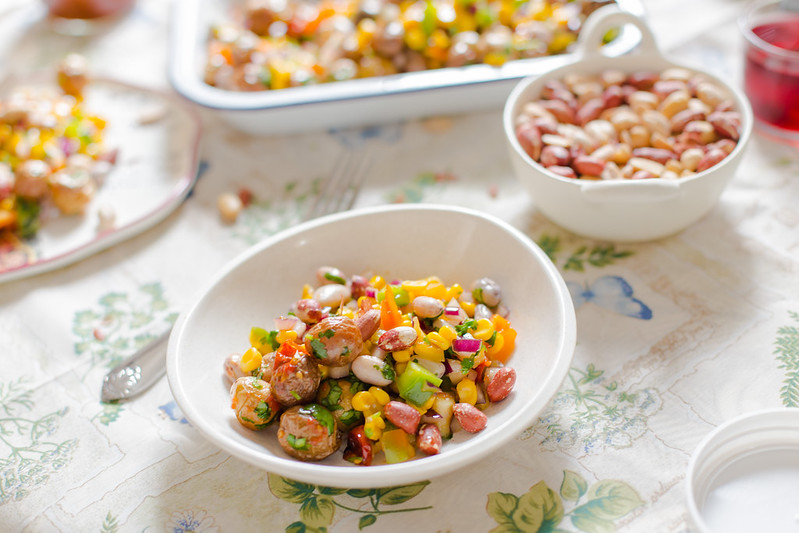 Smoked paprika and mushroom powder enlivens the simple vinaigrette that goes with this salad. Like I mentioned earlier, some even gets tossed in with the potatoes before roasting.
The tip for adding paprika and other peppery spices to dressing came from owner of the little Middle Eastern store in my neighbourhood years ago after he introduced me to Aleppo pepper. He would proudly declare that his was the authentic pepper from Aleppo, and would suggest a few ways to use it. He obviously doesn’t carry it anymore, and I stopped asking for it because it just feels hopeless.

Similarly, I’ve used half and half of Ras el Hanout and smoked paprika in dressings for a warm smoky effect. Dried porcini or Portobello mushroom powder adds an incredibly savoury and flavourful depth to this vinaigrette.

With the summer heat in full force, I like to roast the potatoes and cook the beans and corn, and do all other prep involving heat, in the quiet cooler mornings before it gets too hot. It’s additionally great for later on when I need to assemble the salad in a rush. Once we’re well fed and satiated, we pack whatever is left over (usually a lot!) in jars for lunch throughout the week – it’s perfect! 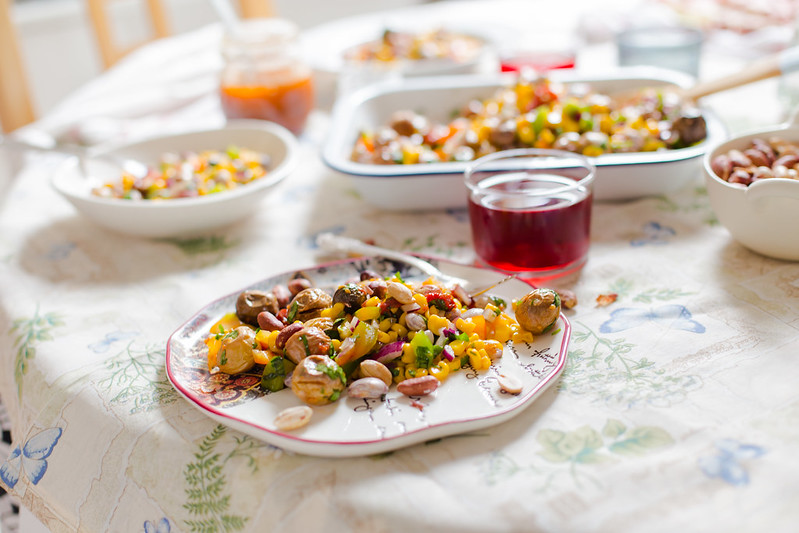 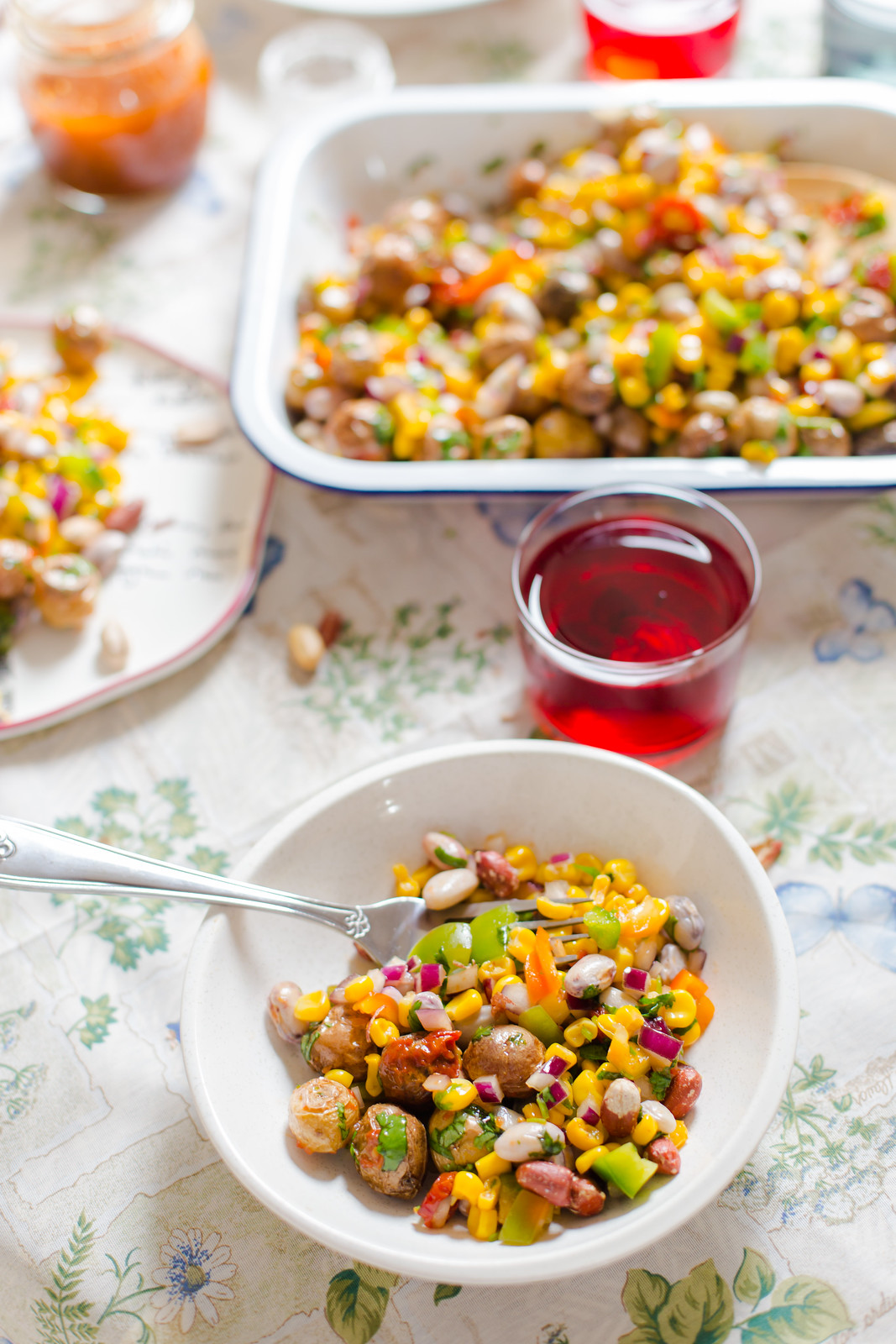 This vibrant and tasty salad filled with nourishing summer veggies is also hearty, so it'll fill you up!
Save Recipe
Print
For vinaigrette
For salad
DIRECTIONS
NOTES
By Elsa Brobbey | the whinery
the Whinery by Elsa Brobbey https://elsbro.com/blog/ 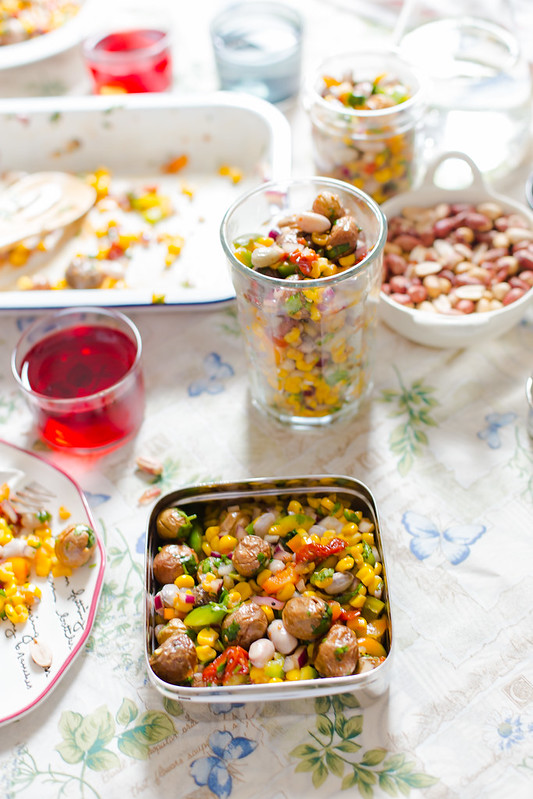 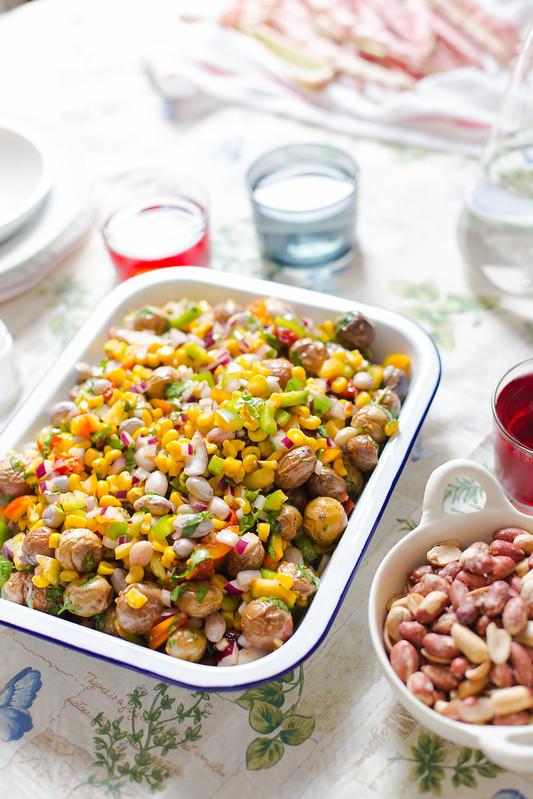 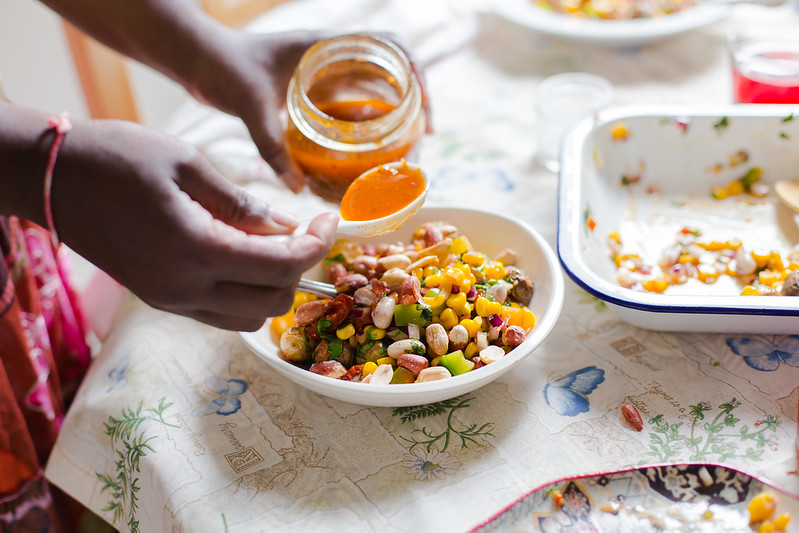